Both Buteyko and Yoga breathing techniques have benefited the health of many individuals and especially respiratory problems (ie. bronchitis & asthma). To the novice, the two systems may seem to contradict but I would argue there are more similarities and synergies between them.

While Pranayama is a component of the yoga tradition, which also consists of meditation and physical postures, Buteyko is a system solely focusing on breath training.

So far there has been only one study from the University of Nottingham that compared the 2 systems (ref). The study was conducted among 90 individuals (69 of which completed the study) that suffered from asthma and were on corticosteroid medication. At the end of the study, which run for 6 months, the Buteyko group showed improvement in both symptoms and a reduction in bronchodilator use. 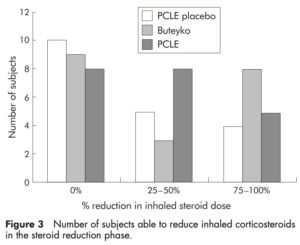 How do pranayama techniques compare with Buteyko breathing?

Pranayama techniques, primarily due to the lack of one reliable source, are practiced in different ways. A few practitioners use “Light on Pranayama” BKS Iyengar as a reference. Most exercises can be performed in an easier or more challenging way by modifying the duration of the volume of breath. It is beyond the scope of this article to explain how this can be achieved but to help you grasp the concept think of box breathing:

While most pranayama techniques are (unfortunately) instructed without much reference to the volume of air, by the time the duration of each cycle increases minute ventilation will unavoidably reduce. Reduction in minute ventilation is at the heart of the Buteyko Method which aims to prevent individuals from chronic and acute hyperventilation.

In the table below you can see a list of pranayama exercises. Those with a sign 〰️ can lead to hypercapnia, while the ones with an ❌ are likely to cause hypocapnia.

Hypercapnia is a key element of Buteyko training.

Is ujjayi breathing compatible with the Buteyko method?

One of the hallmarks of yoga is Ujjayi breathing which often (and correctly in my option) it’s suggested to be performed at all times during asana. Given the different ways that ujjayi breath is practiced, it may appear to be diametrically opposite to Buteyko breathing or very much in-line.

Ujjayi breath is characterized by a sound during the exhalation caused by the constriction of the throat. The sound, for some unknown to me reason, is sometimes exaggerated making the breath loud. In my opinion, ujjayi should be performed as follows:

When practiced like this, the ujjayi breath will lead to hypercapnia and thus cause an increase in body temperature, similar to all hypercapnic breathing exercises.

How to incorporate Buteyko in yoga?

To the extent that you want to support the oxygenation of your brain 🧠 and peripheral organs during your physical practice, you would benefit by breathing light from start to finish. Breathing this way is likely to cause a sense of air hunger, especially in classes where the pace is fast.

You can also incorporate hypoxic breathing in your practice depending on your level of experience and breathing capacity. It is always important to account for the challenges asanas cause to the breath during yoga.

The role of Control Pause in Yoga

Buteyko practitioners, like myself, like to use the Control Pause (CP) test as an approximation of clients’ respiratory capacity. CP can also be performed at the start of a yoga practice. Below is a list of factors that need to be considered:

• CP will tend to be lower later in the day

• CP will be affected by fluctuations in hormone levels. That is likely to be more pronounced in women.

• If the practitioner is seating on the floor (as opposed to a chair), limitations in his posture is likely to affect the CP negatively.