If you want to understand:

a. What happens during the Wim Hof Breathing and why?

b. If the hype about Wim’s Breathing has some merit?

Disclaimer: Since 2017 (when I got certified in the method), my understanding of breathing has evolved and for purposes of efficiency and safety, I teach a modified version of the Wim Hof Breathing.

This article covers what effects Wim Hof Breathing has in the way most people practice it. It is meant to serve educational purposes only and it is not an endorsement of the technique. Based on Harvard’s Copyright and Fair Use guidelines here I am expressing my opinion.

What is the Wim Hof Breathing?

Each round of Wim Hof Breathing has 3 stages:

Should you breathe from the nose 👃🏼 or the mouth 👄?

Wim’s instructions are clear: “Get the air in your body whichever the hole.”

He encourages people to breathe deeply as he believes this way they will feel up their lungs 🫁 with air and every cell of their body with Oxygen. He will often instruct:

He may occasionally mention using the nose or the mouth but that’s not consistent. What he will say though is that:

“When you don’t feel well you should take it easy.”

By taking it easy, he means you should not breathe as deep. That is a very valid point and very much linked to the use of the nose vs mouth. As we will discuss in the next section, the effect of Wim’s Breathing is primarily due to the drop of CO2. When you breathe from the mouth the drop will be bigger and quicker. So whether you use your nose or mouth matters❗️

In a nutshell: “Wim’s breathing is a series of breath holds, on steroids.”

What does Wim Hof breathing do to your blood?

The Wim Hof Breathing is a Hypocapnic Hypoxic technique.

Meaning both the levels of Carbon Dioxide and Oxygen fall below normal: ↓CO2 ↓O2. Here’s why:

One round of Wim Hof Breathing 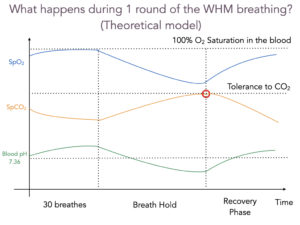 This however is a theoretical model, let’s see what happens in reality❗️

Based on the Nijmegen study the CO2 levels of the participants at the end of each round were lower than at the start. As a result, the participants’ blood 🩸 was hypocapnic for the entire time. At one point oxygen levels drop as low as 50%, bringing the blood 🩸 into deep hypoxia. 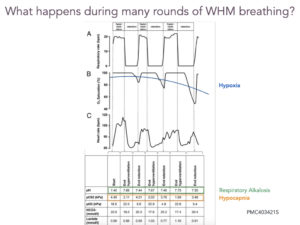 No. Your breath-holding time during the Wim Hof Breathing is long only because you have hyperventilated. With each round of Wim Hof Breathing, the Breath Holds get longer because (a) you start from a lower level of CO2 and (b) your spleen has released more red blood cells (due to hypoxia: ↓O2). 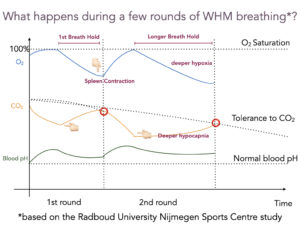 Your breath-hold time depends on your tolerance to CO2 which is not trained in this breathing technique.

Yes, your blood will temporarily be more alkaline. As CO2 levels drop (and CO2 is acidic) your blood will be less acidic. For that reason when Wim tests his urine after the breathing exercise, he finds it alkaline. Soon after though, the body will excrete alkaline buffers through the kidneys to return the blood’s pH to the original levels.

Depends where. As a hypocapnic (↓CO2) breathing technique, the Wim Hof Breathing gets the oxygen trapped in the blood 🩸, due to the Bohr effect. So O2 in the blood will increase, but in the peripheral tissue, including the heart 🫀 and the muscles 💪🏼, will decrease❗️

No. In order for your tolerance to CO2 to increase, you need to practice hypercapnic breathing exercises.

5. Does your tolerance to cold improve with Wim’s breathing?

Possibly but not directly. You will improve your tolerance to cold by practicing cold exposure. The way that Wim’s breathing will help you tolerate cold is by increasing your noradrenaline levels, which was shown to last for 2 hours. As the Wim Hof Breathing makes use of the mouth a lot of the time it has a cooling effect, not heating.

FAQ about the Wim Hof Breathing

1. What are the benefits?

Most of the benefits are derived from the increase in adrenaline. For people that:

the increase in adrenaline is likely to help them initially. Also for those that have a hard time switching off their mind, the shutting down of the oxygen supply during the technique will help them stop thinking.

2. How often should you do the Wim Hof breathing?

Start slow. Once every 2nd or 3rd day is a good place to start. In the absence of any side effects, you can increase the frequency. Be aware that some people have adverse effects in which case you should stop and seek the advice of a professional breathing instructor.

3. When to do Wim Hof breathing?

First thing in the morning 🌞, if they want to get a boost from adrenaline, or last thing at night, they want your mind to switch off 🌙. To avoid adrenaline disrupting your sleep you may want to practice nasal breathing only in the evening.

Similar to all breathing exercises it is best to practice with an empty stomach and after you have urinated.  As your cognitive functions may be compromised soon after, it is best to leave at least 30 mins gap prior to driving, swimming, or doing any activity during which cognition is critical.

I also know people that practice prior to having sex.

While Wim’s breathing is a hypocapnic & hypoxic technique, Patrick’s system brings the body into hypercapnia & hypoxia.

While there are no clear to me, synergies between the 2 systems nothing prevents you from combining the 2. I can promise you though that practicing the Oxygen Advantage exercises will help you get more out of the Wim Hof Method.

If you read the entire article you know more about Wim Hof Breathing than I knew when I finished the Wim Hof Method training in 2017, as non of the above was covered there.
.

If you are experiencing anxiety, headaches, or sore throat after the Wim Hof Breathing, you may benefit by modifying the practice. Ignoring any side effects is unwise.