Sinusitis is caused by swelling or inflammation of the tissue lining the sinuses, leading to nasal blockage and breathing discomfort. Those seeking natural relief can use Buteyko Breathing for sinus infection as it will help them restore their respiratory hygiene and function.

What helps breathing with sinus infection?

Those suffering from sinus infections can find relief through the following methods:

🍃 oregano oil, which can stop bacteria from growing (ref).

🍃 clary sage oil, which acts as an antimicrobial agent (ref).

3. Have a hot bath, apply a warm compress (towel or water bottle) or breathe over a humidifier as the heat will loosen up the mucus in the nasal cavity.

4. Practice breathing exercises in line with the Buteyko Method.

The way we breathe determines our nose’s hygiene. Hyperventilation, mouth-breathing, and erratic breathing are types of dysfunctional breathing that promote inflammation in the sinuses and lead to a blocked nose. The Buteyko Method through the application of basic biochemical principles can help reduce inflammation and restore good respiratory function.

In order to unblock your nose, you need to increase your levels of CO2 and NO in your nasal cavity.

A quick way this can be achieved is by performing short breath-holds:

The longer the breath holds, the higher the build-up of CO2 and NO, while the more physically active you are CO2 will further increase. You can increase CO2 levels by moving your body from side to side on the spot or walking during the breath-holds. What matters most is to keep the recovery breaths short and nasal.

Does chronic sinusitis ever go away?

In contrast with acute sinusitis, chronic sinusitis is more likely to be caused due to chronic dysfunctional breathing patterns (ref). Increasing one’s Control Pause [video] to 30 sec will be a step in the right direction.

Sinusitis is considered chronic if it persists for 12 weeks or more. The symptoms may include:

While the exercise with the short breath-holds described above can still be used, a more structured approach will be needed.

The way you breathe on a daily basis is going to play a significant role in the occurrence and severity of sinusitis. You can improve the way you breathe when you are not conscious of it with the 2-week online course Breathe Right.

Can deviated nasal septum cause sinusitis?

If the septum has deviated far enough it may block the nasal passage increasing the chances of sinusitis. The more one uses his nose 👃🏼 the less likely it will be for the nasal passage to get blocked and fluids to back up in the sinus cavity. For that reason, even following an operation, it can be beneficial for the individual to practice some breathwork in line with the Buteyko Method, such as CO2 Breathing Therapy.

Can sinusitis affect your lungs?

In a paper published on the 23rd of March 2020 (ref) 12 patients (7 men and 5 women) with SARS-CoV-2 and symptoms of acute respiratory distress syndrome at the Jinyintan Hospital showed improved lung function when alternating between pronated and supine position vs supine only. 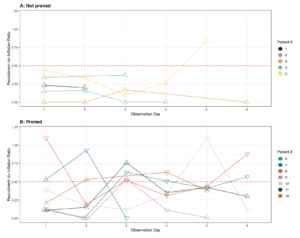