Histamine is a hormone involved in digestion, immune & nervous system function. Anti-histamine drugs for asthma, they are also prescribed to those with food allergies. Improving digestive health and in particular, the gut microbiome and intestinal integrity can help you fix histamine intolerance.

What is histamine intolerance?

Histamine intolerance results from an imbalance between accumulated histamine and the capacity to break it down. The symptoms are due to histamine’s relation with the immune system. Histamine activates immune cells (basophils & mast cells) while causing blood vessels to dilate so that immune cells can be quickly transferred to kill pathogens. 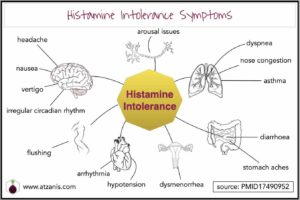 Histamine Intolerance is a fire alarm 🚨 turned on in the immune system, because of a breakdown in the endocrine system.

How is histamine broken down?

Like all hormones, histamine needs to be eliminated from the body when it has done its job. While it is broken down by a few different enzymes (HNMT, NAT1,2 & DAO), it is the DAO (ref) responsible for the breakdown of ingested histamine. 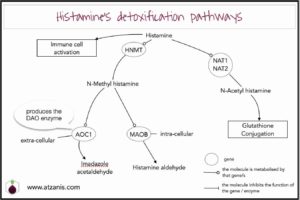 Can histamine cause digestive problems?

a. all 4 histamine receptors H1R-H4R are found in the digestive tract and they have excitatory actions there (ref).

b. In a study conducted in Italy, 13 out of 14 subjects (with food intolerances) reported benefits in at least 1 food after DAO supplementation (ref).

c. The capacity of both histamine breakdown pathways: HNMT and DAO have been reported to be reduced in those with food intolerances (ref).

d. Elevated levels of histamine in the brain have been shown to suppress appetite (ref).

e. 30-55% of individuals with digestive disorders, including IBS, IBD, and Chron’s Disease have histamine intolerance (ref).

Those with histamine intolerance will benefit by avoiding 2 categories of foods:

a. Those that contain histamine

b. those that can cause the release of histamine in the body, although they don’t contain histamine (ref)

The fresher the food the lower it is in histamine.

Vitamin C supplementation has also been shown to reduce histamine levels (ref), while B6 supplementation is also beneficial as it acts as a co-factor in DAO production (ref).

Drugs that cause histamine intolerance

It should probably come as no surprise that medication can also mess up your levels of histamine. Drug intake, especially long-term, should be considered in the interpretation of histamine intolerance symptoms and DAO concentrations (ref).

Can hormonal imbalance cause histamine intolerance?

Histamine levels are positively correlated with estrogen, while progesterone and testosterone levels are negatively correlated in women and men respectively. Women are more likely than men (ref) to suffer from histamine intolerance possibly due to the fluctuations in sex hormones during the menstrual cycle and menopause.

Histamine and estrogen have a bidirectional relationship.

Histamine has been shown to stimulate, in a dose-dependent manner, the synthesis of estradiol (E2) (ref). As estradiol levels are responsible for painful uterine contractions of primary dysmenorrhea, through the increase of prostaglandin F2α, histamine can also be considered a contributing factor. Estrogen also influences histamine’s action. During the mid-cycle, when ovulation occurs and estrogen peaks, a significant increase in the occurrence of wheal and flare is observed due to histamine (ref). Progesterone on the other hand stabilizes histamine levels (ref).

During pregnancy, DAO concentrations in the body may increase by as much as 500%, due to the production of DAO by the placenta (ref), which may well explain the reduction in food intolerances women experience during this period (ref).

Histamine increases libido (ref), which is why antihistamine medication needs to be considered when treating sexual dysfunction.

The link between histamine and diabetes goes back to 1950 (ref). Plasma histamine was shown to reduce after insulin administration in diabetic rats (ref). Given the positive correlation between diabetes and histamine intolerance (ref), stabilizing sugar levels should be of high priority in those with histamine symptoms.

In pancreatic beta cells, the activation of histamine 3 receptors (H3R) was shown to:

b. reduce glucagon production in a non-hyperglycemic state (ref).

Can histamine cause breathing problems?

CO2 can suppress histamine release in mast cells by increasing intracellular Calcium levels (ref). While no studies so far have tested the use of breathing exercises to suppress seasonal allergies, it is well documented and clinically confirmed that certain breathing exercises can increase the levels of CO2 in the body. Based on that it is well worth considering using CO2 Breathing Therapy for histamine intolerance.

How to test for histamine intolerance?

Prior to treating any condition, it is wise to confirm its presence first. The symptoms of histamine intolerance overlap with those having intestinal permeability and gut dysbiosis. By measuring the levels of DAO enzyme in your blood you can assess your body’s capacity to break down histamine and thus indirectly the presence of histamine overload.

When DAO levels are below <10 U/mL (ref1, ref2) the probability of histamine intolerance is high.

Labs that offer this service in 🇬🇧 UK are Smart Nutrition (link) and Invivo Clinical, and in 🇦🇺 AUS: ImmunoPro (link).

23andme results can be useful in identifying potential blockages in the pathway of histamine. At the same time, it is dangerous to drive conclusions solely from one’s genetic makeup, let alone one gene. In many cases, a person may have no SNPs in the gene that produces the DAO enzyme (AOC1 gene) and at the same time experience histamine-like reactions after the consumption of red wine for instance. The case below is such an example.

The woman is in her mid-40s, vegetarian with a more or less healthy lifestyle. She carries only 1 homozygous polymorphism in the AOC1 gene which has been shown to be beneficial.

While there seems to be no burden on the production of DAO if you look at the entire pathway you will see that she carries SNPs in the HNMT and MAOB genes. Both of which can tax DAO’s function.

How can this information be useful?

For this woman supporting the function of HNMT and MAOB can help with histamine symptoms. For HNMT methylation support as well Salacia Oblonga (ref)  can be used while for MAOB vit B2.

This Nutrigenomics analysis would not be possible without access to Opus23 analytics.

Antihistamine tablets can be life-saving in times of crisis. At the same time if one doesn’t deal with what causes the reaction at 1st place she/he is trying to put off a fire by removing the battery from the fire alarm.